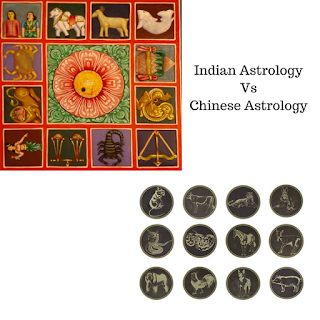 Indian astrologers divide a zone of the starry heavens into the 12 signs of the zodiac of 30 degrees each. Each sign is subdivided into two equal parts of 15 degrees, thus making 24 divisions in the heavens. Each division is called a hora, the Greek word for hour.

These horas, astrologers say, are ruled alternatively by the sun and the moon, with the order of control changing, depending on whether the zodiacal sign is odd or even. Since the sun is male his influence is masculine and cruel, and because the moon is female her control is feminine and mild.

The Chinese Astrology is based on the time of birth and each year is represented by animal signs. The 12 animals are divided into five elements such as earth, water, wood, fire and metal. Every element is believed to be force that motivates life and it is of 2 year period. Fire and earth symbolizes excitement and strong secure grounds respectively. Metal element people are organized and water types leads to have good emotional relationships.

However the Indian astrology is a set of ganitha and phalita which means the calculations and predictions. The position of the stars and planets is taken into consideration for determining the future. Indian Astrology as the name says originated in India also called as vedic astrology. It was written in Vedic scripture by sages.

Chinese Astrology is based on the lunar phase of birth which means the phase of moon is noted at the time of birth. As per the lunar calendar, every month begins with new moon and it lasts for 29 days.

There are four types of phases which are namely new moon, Full moon, waxing moon and waning moon. They depict one’s personality by these phases. For example, People born on waxing moon phase are said to be hardworking, Full moon people are diplomatic, and new moon people are innovative and adventurous. While waning people are peaceful persons.